START HERE
Welcome to Networks Theatre
It's your theatre, be a part of it!
Pantomime, Drama, Musicals, Poetry...
100 shows in 19 years
Leading English speaking theatre in the Costa Blanca
Click the logo or scroll to get started

Bringing the magic of pantomime
to Orihuela for 15 years!
Oh yes we do!
Dick Whittington 2013

Nick Moore is the Artistic Director and principal writer for Networks Theatre. With Lee Alexander he founded the theatre back in 1999 with the aim of using theatre as a method to learn English. Since then they have grown from strength to strength, still preserving the original aim of education but expanding to become one of the region's most successful theatre companies. Nick has overseen a staggering 75 shows either as director, writer or actor and all of these with a wide range of styles and subjects.

These shows across the last 15 years have illustrated the scope of Nick's writing skills. Favourite shows have included all the pantomimes, the drama When I Was Me and the pop musical Odysseus. Each Christmas and Summer he writes and directs a theatre course where up to 100 students perform in two or three identical shows. Some of Nick's writing can be purchased at Pantomime & Show Scripts On-Line

Dennis Carpenter studied at The University of the West of England, getting a Bachelor of Art Honours Degree in Fashion and Textile Design. He also worked in the Cotswolds and in London as a picture framer and furniture maker, specialising in gilding and painted finishes.

He has been at Networks since 2001, where he has been teaching and working creatively in the theatre. Dennis designs and makes the costumes for each actor in every show, he also designs and painstakingly creates the sets and props that are required. So far he has been involved in every show, if not performing in the annual pantomime, then working backstage to make sure everything is ready and running smoothly for each show.

Up to now his favourite character has to be playing one of the ugly sisters in Cinderella or the baddie such as king rat, the villain is always the most fun part in a show. As for his favourite show, well there have been lots, but Titanic, the pantomimes, The Two Princesses in Waiting and Robin Hood, to name a few.

James Gregory was born in Kent, England and went to Kings School in Rochester, then he studied at the University of Westminster, graduating in 1993. He came to Madrid to teach English in 1995 and has been at Networks English Studies since 1999.
He has worked on many Networks Theatre productions since 2001 as the Light & Sound Technician.

His favourite show has been Odysseus because it combined a great soundtrack and script resulting in his first "Rock Concert" Show.

He loves Networks Theatre because it challenges him technically and it involves working with an incredibly professional group of talented young people.

Pedro was born in Orihuela and he started his journey in Networks Theatre back in 1999. As a member of Networks Theatre’s first generation he has participated in over 13 productions such as: Robin Hood, Treasure Planet, The Prince and the Pauper, Simply Knowing You and Odysseus.

He currently takes care of the Administration, Publicity and Multimedia departments. In 2014 he successfully directed and adapted a shortened version of Hamlet called “Killing Hamlet”. Recently he put on stage his play “Totem”, presented in October 2015.

Jo is originally from Greece but has lived in the UK for many years. She studied Psychology and Education and started working as an English teacher in Spain in 2006.

She loves music and theatre and has been involved in a number of shows at Networks Theatre with her favourite to date being "Behind the Wall" and "Cinderella." Her show "A Game of Love" won Show of the Year at the Networks Theatre Awards in 2013.

Lee Alexander has been working in Spain as an English teacher for more than forty years. He has always been fascinated by the process of foreign-language acquisition, especially in children.

In 1977 he set up a small English centre with his wife Cristina Guirao in Orihuela, Alicante using the most up-to-date methodology available at that time, and established a reputation for offering practical, interactive, communicative classes in English only. Convinced of the possibilities of language learning through drama activities, he built a small studio theatre on the premises with his colleague Ken O’Carroll and began experimenting with video-taped productions of sketches and one-act plays. In 1999 he met Nick Moore, a professional actor on tour, and together they founded Networks Theatre based on one firm belief: that it was possible, using only students and teachers from the academy, to produce high-quality musical plays in English.
That belief required massive teamwork and talent from students and staff, but it soon became a reality.
Over the past 15 years Networks Theatre has produced more than 75 spectacular shows, with hundreds of students participating. In 2012 Networks Theatre inaugurated its new venue, a custom-made, black-box theatre to showcase new productions. Lee enjoys the annual Christmas pantomime, and always looks forward to rehearsals for the children’s shows which he will watch over and over again.

Bringing the magic of pantomime
to Orihuela for 15 years!
Oh yes we do!
Dick Whittington 2013

Superb attention
to detail..
from the costumes to the hair to the stage design,
everything about the show was brilliant!
THE SECRET GARDEN 2013

Being part of a team, working together to create the best show possible.
That’s the magic of putting on a show!
RAINFOREST

FROM TOUCHING DRAMA TO FUN MUSICALS
NETWORKS
HAS IT ALL

Welcome to Networks Theatre where we’ve been presenting theatre in English since 1999. For 15 years we’ve brought pantomimes, comedies, musicals, poetry and plays to Orihuela. If you are discovering our work for the first time you’re in for a treat! If you’re already familiar with our shows, welcome back! Our season this year runs from October through to June and brings you 9 shows that illustrate the wide talent pool that we are tapping into from our local community. We look forward to welcoming you to the shows so come and make a night of it!

Welcome to the pond!

Here comes UGLY! This will be the third production since our return. This is our third chapter in a long history of presenting theatre in English in Orihuela. Our first chapter took place in the original theatre in C/ Reyes Católicos which was home to the first and second production of Ugly! back in 2004 and 2011 respectively. This comedy musical along with a total of 60 shows allowed us to build a repertoire of musicals, plays and pantomimes that stood us in good stead when we moved to the current larger black box theatre in 2012.
From that date, our second chapter, a further 47 shows were produced until everything closed down in March 2020. When programming the theatre for our return we wanted to pick a show that not only showed us at our best but was a celebration of life!
When I wrote the show nearly 20 years ago, I wanted to create something where all three ages of our actors could be represented. The youngest students play the chicks, older ones get to play the cats and the adults are the principal characters. It’s been a joy to rehearse and has been put together in just 6 short weeks.
As a director, it’s been wonderful to work with the actors and I need to thank the parents of the younger actors who agreed to let me have them in rehearsal sometimes late into the evening! I’m proud of all the actors and the work they have produced. They listen so carefully to my direction and when you see the show you’ll see they are all stars in the making.
This will be the last show of Inés Ruiz who has been my theatre “right hand man” for many years now. This show marks her last show at Networks as she is off to London to continue her studies and her dream of becoming a performer. That dream will come true. She is a remarkable talent as you can tell from her choreography, performing and technical prowess.
Ugly looks great thanks to Dennis Carpenter who has not only painted the stage design but has organised the costumes to make us all look so brilliant.
Finally, I have to mention David Murcia. This remarkable young actor, who at just ten years old is playing the central character of Number 9, an amazing talent. This is why we come to work! It’s thanks to Networks Theatre that thousands of young people have had the chance to act in English, not only enjoying the thrill of theatre, but learning English and all the other lessons that producing theatre can bring. Long may it continue. Whether you miaow, woof, quack or honk, UGLY! is a show that has something for everyone. Enjoy the show!

THE SECRET GARDEN – THIS WEEK ONLY.

0
By networks Posted on April 3, 2022 in Uncategorized

We are very proud and excited to say that after the success of the Show Must Go On, Networks Theatre is back again with a super play version of the much loved classic novel The Secret Garden.

The show is adapted and directed by Networks Theatre Artistic Director Nick Moore.  He said. “we are so happy to be back doing what we do best at Networks Theatre in Orihuela that is presenting good quality theatre in English. The talented cast do a brilliant job and we hope people will once again return to the magic of live theatre.”

Join us as we discover Mary Lennox’s story.  Returning from India after the death of her parent’s from cholera, Mary finds herself in the care of her Uncle Archibald in the austere Yorkshire home of Misselthwaite Manor.  With nothing to do she discover a locked “secret” garden.  With the help of the staff and her newly discovered cousin, Colin, she brings not only the garden, but the house back to life. This touching story is only being presented this week. Tickets are available from our website. 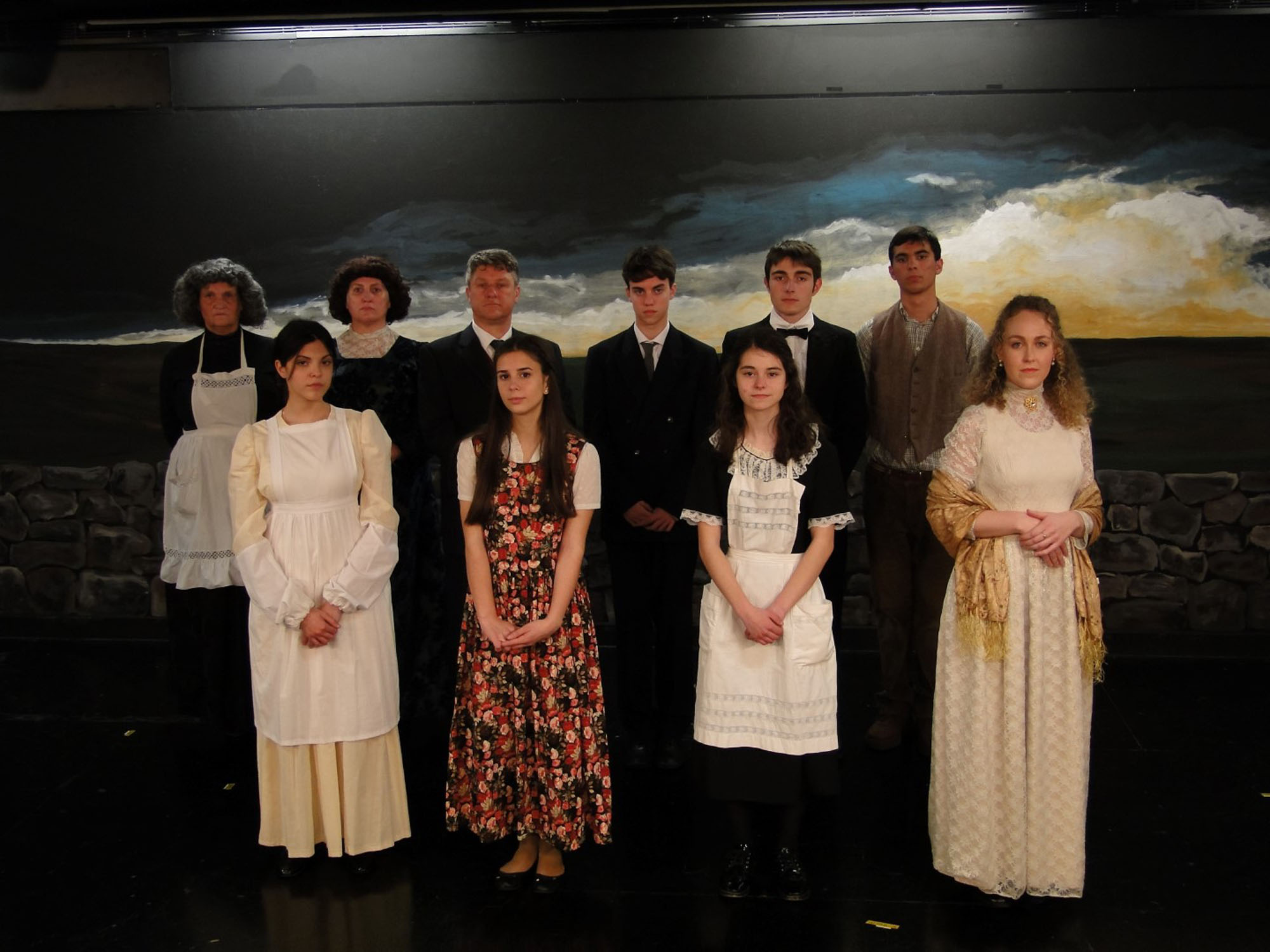 The Secret Garden
The Show Must Go On

SNOW WHITE AND THE SEVEN DWARFS

He has been at Networks since 2001, where he has been teaching and working creatively in the theatre. [Bio]

Lee Alexander has been working in Spain as an English teacher for more than forty years. [Bio]

Inés was born in Orihuela and she started his journey in Networks Theatre back in 2004. [Bio]

OVER SEVENTY FIVE SHOWS SINCE 1999!

Networks Theatre is a permanent home for English-speaking theatre in Orihuela, now performing at our new venue, a purpose-built, blackbox theatre in San Agustin Street, opposite Colegio Jesus Maria. Since 1998 we have produced up to seven shows a year, all in the English language.

Nearly all of the shows have been written and directed by theatre professional Nick Moore, with stage designs and costumes created by artist Dennis Carpenter. Our work ranges from an annual traditional pantomime, to musicals, comedies, dramas and Theatre in Education shows for children. Thanks for visiting the website! Take a look around!

If you would like to get in touch with us, please leave your email address and we will get back to you as soon as possible